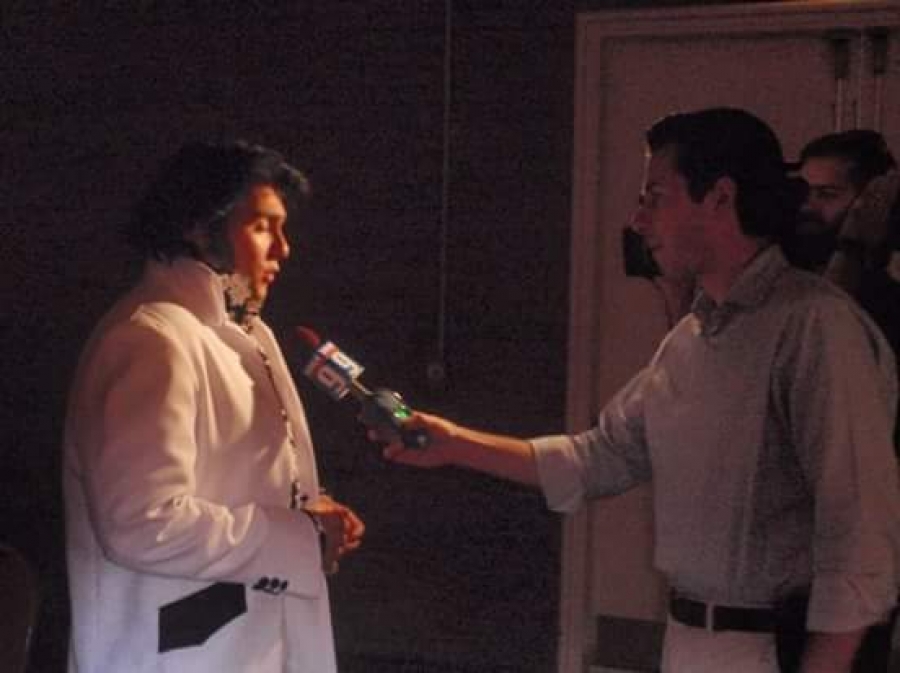 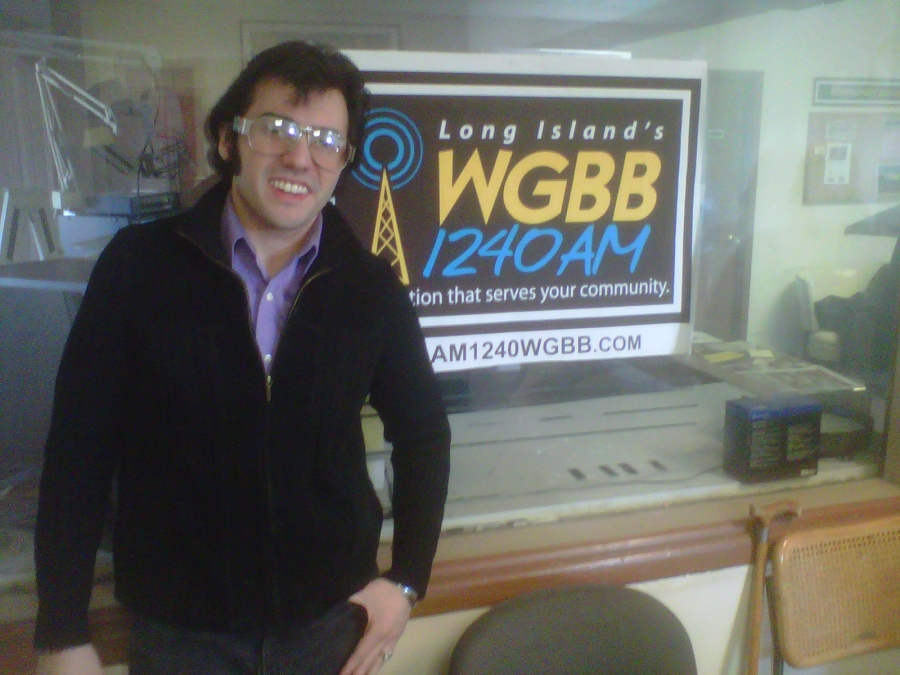 The two men with the wavy, slicked-back hair could pass for your typical father and son until you take a closer look.

Dressed in white-studded jumpsuits, they have a swagger in their hips, belt out golden oldies and capture the hearts of many in dimly lit lounges throughout the tri-state area and beyond.

What makes them unique is their musical mimicry recreating the sounds and sights from the King of rock ‘n’ roll — Elvis Presley.

When the one-year gig finished, he moved on to perform in Joe Franklin’s Oldies Review Show in Atlantic City and The Palms Casino Resort in Las Vegas. Along the way he found time to book other performances within Gregg Peters has been singing Elvis tunes for more than 40 years and now his son Lamar Peters, 25, is following in his footsteps. Gregg got started in November 1977 — just three months after Elvis’ death — at the Riverboat Restaurant in the Empire State Building, performing six nights a week. He still remembers the place being packed and smoky with the audience swaying and swinging to the oldies.

the five boroughs and out on Long Island.

The senior Peters has a theory as to why he, and now his son Lamar, continue to attract an audience even in this modern musical age.

“I and my son Lamar stay in our own Elvis mode on that era of music and the music from the 1950s to the 1970s is still popular today,” Gregg said. “It is a niche type of music where people respond and we don’t feel we have to keep up with artists like Miley Cyrus and Justin Bieber. There are a lot of Elvis fans out there and like John Lennon from The Beatles said, ‘Before Elvis there was nothing.’”

The Peters both grew up in Astoria and now currently live in Middle Village. Lamar Peters has been singing and dancing since the tender age of 5. He believes that after Elvis there was nothing in terms of music that can live up to his standards. He has some advice to other Elvis tribute performers about keeping up with modern times, which he adapts for his own life.

“Stay in the moment, look your best and practice your vocals constantly to be the best you can be,” he said. “I love tributizing the King and singing songs like “Heartbreak Hotel” and “Jailhouse Rock,” but I also perform some Tom Jones, Paul Anka and Billy Ray Cyrus hits in my rock ’n’ roll review show. Elvis’ music lives on through these modern times because his lyrics and sound touch hearts and will continue to do so.”

Lamar Peters got his start at the B. B. King Blues Club & Grill on West 42nd Street in Times Square performing Las Vegas-casino style Elvis concerts. He explained that he likes some modern rock and pop music, but there is nothing like the lyrics and emotional meaning of the oldies, such as Dion & the Belmonts, Elvis and The Beatles.

“When I am entertaining a young crowd, I tell them just because you’re introduced to something you do not understand, does not mean it shouldn’t be understood,” he said. “I started performing at 15 years old with my father and my brother J.J. Burton; who plays the guitar in our shows. My grandmother, who is called Miss Marie, sings Connie Francis, Supremes and Etta James tunes in our shows — it’s a family affair.”

Most of the Peters’ fans believe Elvis’ music does keep up with modern beats and surpasses it with soulful lyrics and great musicality. A few say they like some modern tunes, such as Elton John and Lady Gaga, but most say the golden oldies will never be forgotten and the music of today does not have enough heartfelt meaning. One such fan, Angela Canillas, 41, said there is no comparison between the days of Elvis and today.

“I was brought up on Elvis, The Rolling Stones and KISS; it was clean music you could relate to,” she said. “Elvis has been my idol since I was 3 years old. A lot of today’s music is screaming with not much in terms of meaningful music and you cannot dance to a lot of today’s music. My daughter and her friends who are all 16-year-olds appreciate Elvis, Dion and the music from the ’50s through the ’70s era.”

Randy Novick, a Rodney Dangerfield sound-alike performer and saxophone player from Howard Beach, has performed in the past with the Peters and said old-time music moves you and makes you feel good.

“There is a lot of good music and talented artists out there today,” he said, “but there is no one that can match Elvis and other artists of that era, such as Tom Jones.”

History seems to have repeated itself with decades of followers and historians of the Elvis era, which includes Professor John Covach, director of the Institute for Popular Music at the University of Rochester, thinks Elvis’ music has endured quite well over the last 50 years and people still listen to it and they love the tribute performers.

“Since the 1970s all kinds of tribute bands became popular and still are,” Covach said. “When Elvis was still alive in the 1970s, there were tribute artists paying him homage. A tribute artist presents the singer’s work and improves on it. But an impersonator recreates an artist’s celebrity so people really look up to those artists in this day and age.” 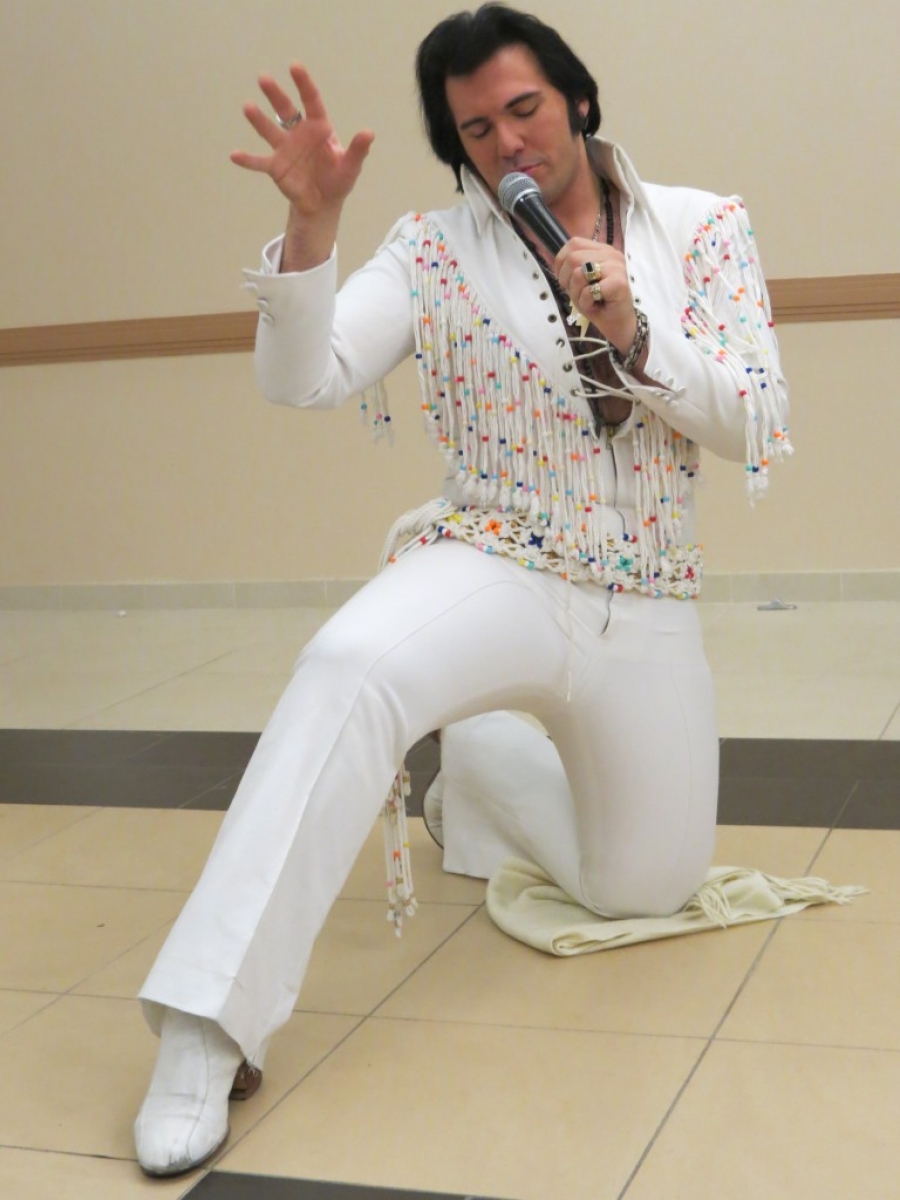 The King has returned.

Seniors crowded into the Howard Beach Senior Center Friday to catch a glimpse of one of New York’s most well known Elvis Presley tribute artists, Lamar Peters, and his renditions of hits by the King of Rock ‘n Roll had residents on their feet dancing and singing along to everything from such upbeat tunes as “Jailhouse Rock” to slower ballads like “It’s Now or Never.”

While clapping their hands and often cheering, those attending the packed afternoon performance noted that Lamar Peters comes from a family of performers – his father, Gregg Peters, has been an Elvis Presley tribute artist for more than 35 years.

Often giving a bit of history about the songs, Lamar Peters, decked out in an Elvis-inspired white jumpsuit, inspired the music lovers to frequently belt out the lyrics themselves and even jump out of their seats as he sang “Impossible Dream,” “Heartbreak Hotel,” “Suspicious Minds,” “Blue Suede Shoes,” and more.

The afternoon concert was funded by a grant from Assemblyman Phil Goldfeder.

Lamar Peters, who is a second generation Elvis tribute artist, told us that even with GigMasters finding a sense of community among other tribute artists can be hard.

Mr. Peters said he fell effortlessly into the role of Elvis. For one thing, his father was among the first and most preeminent Elvis entertainers on the East Coast. It also doesn’t hurt that, with his olive complexion and coiffed black hair, he shares a striking resemblance to the King of Rock and Roll himself.

“I can’t go one day without people telling me ‘Hey, you know you look a lot like Elvis,'” he said.

Mr. Peters, a Queens native who was raised among entertainers and has a background in dance, also steps into the shoes of many rock and roll superstars. As part of “The Rock & Roll Review Show,” the 90-minute show he conceived, Mr. Peters performs as Sam Cooke, Johnny Cash and Jerry Lewis. But Elvis remains enduring.

“Elvis wasnt a joke. Simply put, he was the best he ever was,” said Mr. Peters. “And so I try to deliver that to my audience .